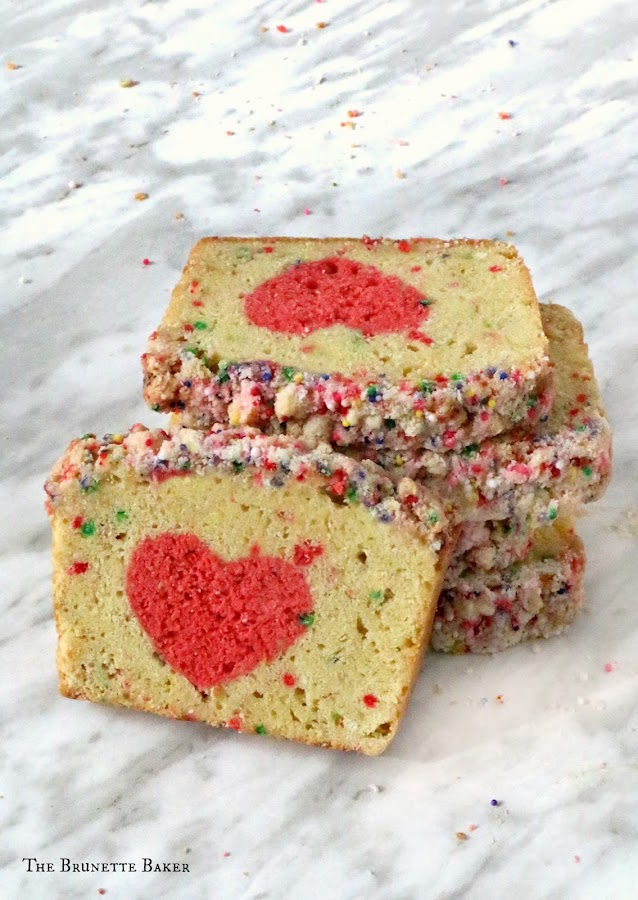 YOU GUYS. It's Valentine's Day!

I've harboured disdain for this greeting card holiday since I was 16 years old, but remain as cordial as I can be for the sake of those that truly love this day and all it represents. It's like that relationship with that one person you tolerate because you have to while mentally flipping double middle fingers at them continuously. It's a real treat.

Let's take a stroll down memory lane and allow me to tell you why this day is total balls for me.

When I was 16, I had my first real boyfriend. This was a big deal to me because I wasn't interested in boys like that until 10th Grade when I fell head over heels for a boy in my Biology class. It was weird. Whenever I would see him, everything went into slow motion like those cheesy 80s movies I couldn't seem to get enough of and my face would turn bright red. I would stare the entire class at the back of his head, studying birthmarks and the swirl pattern of his hair. Unfortunately, he knew exactly the effect he had on me as did two of my closest friends. After poking around a bit, my best friend, Rob, found out he was interested in exploring a relationship with me, and oh my goodness, elation didn't even begin to explain this feeling. Fast forward a couple of months later. As weeks went on, he became aloof and distant, unbeknownst to me, but obvious to everyone else. I was excited about the prospect of our birthdays as they were separated by only two days, which I took as another sign we were destined to be together. Stupid girl. I soon discovered how cruel and unfair young love really is when he broke up with me on Valentine's Day. I was told that he waited until right after his birthday to break up with me so he would get his birthday gift and he wouldn't have to buy me a Valentine's Day gift as he already gotten me something for my birthday. To pour salt on the wound, his best friend told me he harboured strong feelings for another girl and had for quite some time, but she wasn't the least bit interested in him and I was a filler until she came to her senses or someone better came along. I'm not going to lie, it still stings retelling that story. And I really wish I had a happy ending to this sadness where the best friend that told me and I starting dating, but I do not. That only happens in movies - at least to me anyway.

My 21st birthday had finally arrived. My girlfriends has planned a big night out that following weekend to celebrate the day I was officially legal for everything. It was a momentous occasion because I could enjoy an alcoholic drink while playing the slots in a casino at the same time. Unfortunately, as plans got closer to the day, girls began dropping like flies, ditching me for their boyfriends until there were only four of us left standing. What happened to dolls before balls? Besties before testes? Sisters before misters? We had a fantastic time, but I spend the following week listening to the others incessantly complain about what dicks their boyfriends were and their pathetic attempts at love while my day came and gone without any more thought. Good times. It wasn't all doom and gloom. I had several gentleman buy me drinks throughout the night, one of which I went on a few really fun dates with. Happy Birthday to me. 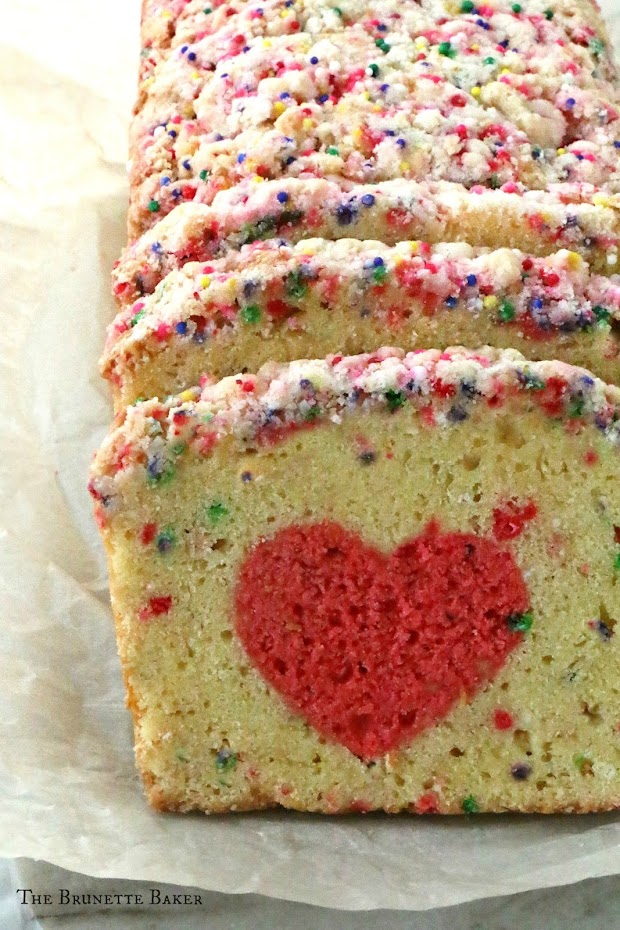 On my the eve before my 30th birthday, my husband bought me a gorgeous - and quite substantial - bouquet of flowers to start a weekend long celebration. It was supposed to be delivered on my birthday during the afternoon when I would be home. That evening, he walked in the door with a cheeky smile on his face, asking how my day went. When I didn't mention the flowers, he brought them up. They hadn't been delivered. My husband was livid and immediately called the florist to have some words. She replied with, "We apologize, but we are swamped with deliveries. I'll call and see what's going on, but it's Valentine's Day, so......" Husby responded with, "No, it's not Valentine's Day actually! It's four days away, but it is my wife's birthday!" It got heated at times, making me curse the day under my breath, but was eventually sorted. However, the plot thickens. My husband had organized an incredible Dirty 30 birthday bash in my honour the following night - on my actual birthday. When he delivered the cake to the venue, he realized they made an error and set up in the wrong room. The room we booked would fit 40 comfortably; the room they gave us would fit 15 people tops and we had 28 friends and family coming. I don't know what they were thinking, but my guess is they either thought we wouldn't notice or banked on us just accepting it once we showed up. However, they forgot to factor in that my husband was dropping off the cake and would be absolutely cognizant. It was a glorified shit show from that point. I would have been perfectly fine not knowing what happened had it not been for the server that filled us in and told us they had the room completely prepped for Valentine's Day brunch the following day and they had a crazy, very stressful mad scramble to organize it for my party.

I think that was the point I threw my hands up in the air and admitted defeat. You see, Valentine's Day had always interfered with my birthday in some way. People would forget. Plans would fall through. Valentine's Day plans forever trump it. It sucks. Screw you, Valentine maiden and your weird flying, naked manchild.

Now that I have kids, my frustration has been put on the back burner. I have a daughter that looks forward to this day for weeks. Unicorns. Rainbows. Unicorns throwing up rainbows. Hearts. Pink. What's not to love? My son uses it as an excuse to score a couple more treats in his lunchbox - and I can't blame him. For the sake of my children, Valentine's Day and I have a surface relationship. We smile. We nod. We make pleasantries. I don't want them to take on my antipathy because of the issues I harbour. That's not fair. 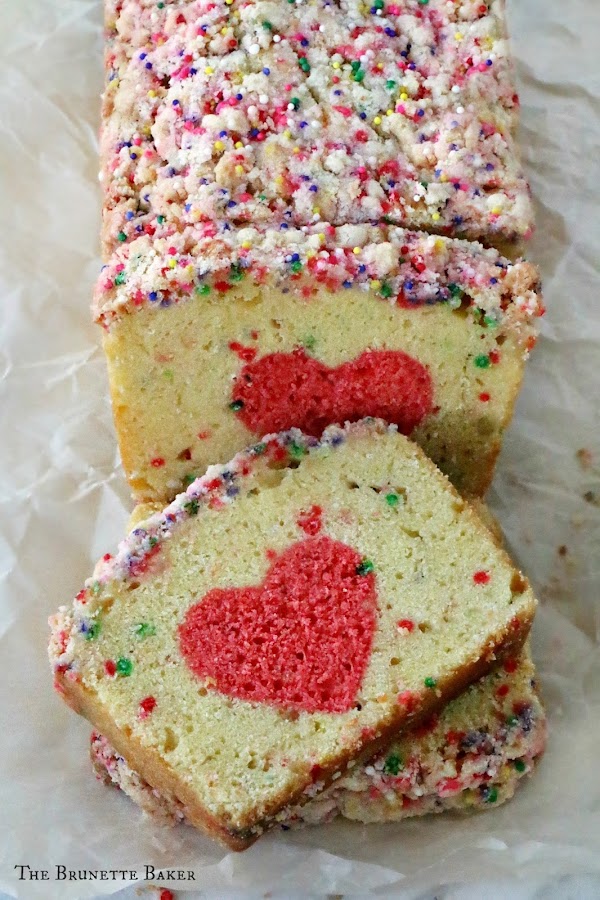 But I will bring cake. I never joke about cake. Seriously, my loves. Enjoy your day however you wish to celebrate. Whether it's with a significant other or your best friends, love is always a reason to celebrate.

This cake was such fun to make. I will warn it is a bit time consuming, but I promise the result is beautiful and quite impressive. This would make a great gender reveal cake or any holidays with the swap of a cookie cutter.

*It's not imperative that you use clear vanilla extract, but according to the creator of this loaf, it does have an impact the overall appearance of the loaf once baked. I'm not sure I noticed, but I'll take his word for it.

**If you do not have butter flavoured extract, just substitute with another teaspoon of vanilla extract. Almond or coconut extract would be quite lovely in this recipe as well.

In a mixing bowl, whisk together flour, salt, and baking powder.

In a separate mixing bowl, using an electric mixer at medium speed, beat together butter and sugar and cream until pale yellow in colour. Add in eggs, one at a time, beating well after each addition. Add in desired gel food colouring along with vanilla (and butter extract if using). Mix until colour is uniformly distributed. Slowly add in flour in two additions, alternating with the buttermilk. Mix only until incorporated - batter will be thick. Pour into prepared jelly roll pan and evenly distribute batter using an offset spatula.

Bake for 20 minutes or until a toothpick inserted in cake comes out clean or with a few moist crumbs. Remove cake from oven and allow to cool. Once completely cooled, using one cookie cutter shape of your choice (be sure cookie cutter is no larger than 2 inches), carefully cut out approximately 16 shapes. This number may vary depending on the size of cutter being used. Cover with plastic wrap and set aside.

In a small mixing bowl, whisk together flour, sugar, and salt. Using a fork or your fingers, gently massage butter into flour mixture until a coarse crumb is formed. Add in vanilla extract and sprinkles and mix until smaller crumbs is achieved. Cover and refrigerate until ready to use.

Prepare a 9 x 5 loaf pan by spraying entire pan with a non-stick spray. Line with parchment paper, leaving an inch hanging over the side for easy removal once baked.

In a mixing bowl, whisk together flour and salt. Set aside.

In a separate mixing bowl, beat butter and sugar together until creamy and pale yellow in colour. Add in eggs and egg yolk, one at a time, beating well after each addition. Beat in both extracts.

Take 1/3 of the batter and line the bottom of prepared loaf pan. Carefully line up and arrange cut out cake shapes and place into cake batter. You can do this one at a time, but be sure the shapes fit tightly into the pan. Pour remaining cake batter into pan. Give a few hard taps onto the counter to release any air bubbles that may have formed. Slowly add in flour mixture and mix only until incorporated. Toss sprinkles in a couple tablespoons of flour and shake off excess. This will help with any bleeding of colour. This step is not necessary, but helps a bit.

Bake for 60-70 minutes. Loaf is done when topping is golden brown and a skewer inserted comes out clean. Allow cake to cool in pan for 10 minutes. Remove cake from pan, discard parchment paper, and place on a wire rack to cool completely.

Slice and serve. Loaf will keep for four days covered in an air tight container.