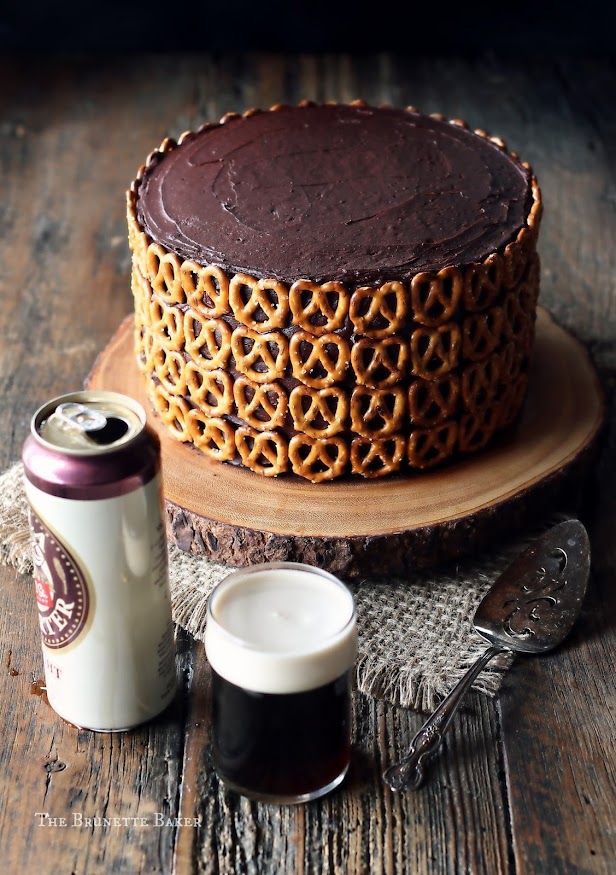 This is a statement that often spews from my mouth when I'm out with friends for the evening and alcoholic beverages are involved. Yet, despite this small exclamation and knowledge of what I already know before the glass touches my lips, it certainly doesn't stop me from trying what they are drinking. "Banana Bread Beer? Sure. How bad can it actual- OHMYGOSH FOR THE LOVE OF ALL THINGS BEAUTIFUL AND HOLY, WHY??? IT TASTES NOTHING LIKE BANANA BREAD. IT TASTES LIKE BURN!"

You see, I'm not much of a drinker. Actually, strike that. I'm not much of a beer or wine drinker. I don't mind liquor like bourbon or gin and I was introduced to cider this past Spring while attending a cousin's wedding in England. It was there that I also discovered the refreshing beverage of Pimm's. Let's just say that drinking three in a row may turn one's legs into spaghetti and make walking a bit more difficult. 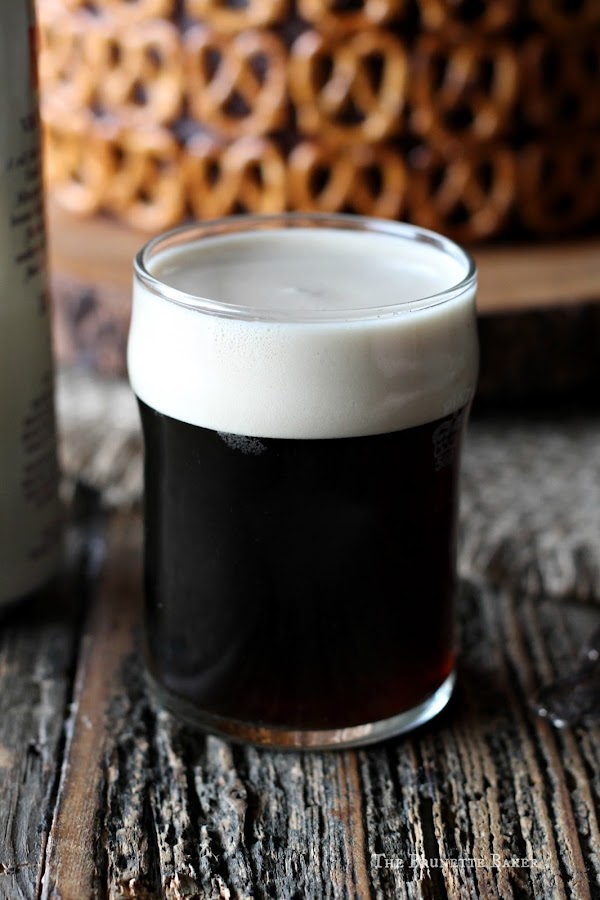 Just because I don't enjoy a brewsky with my dinner doesn't mean I don't enjoy it in my dinner. Steak and Ale Pie? Yes please. Beer Battered Fish and Chips? Giddy up. Soft pretzels dipped into a warm beer and cheddar sauce? LIKE A BOSS.

But take that same beer and dump it into an indulgent chocolate cake batter - you better believe your sweet cheeks I'm gonna be all over it. In fact, I would happily endure a hangover because of it.

Stout beer is incredible baked into a cake. If you've never tried it, I strongly suggest you do. Butter Celebrates! Guinness Cake with Pretzels is a cracking example of this kick ass flavour combination. The stout creates a moistness to the cake while lending an unmistakable flavour. Think of it as the cake's wingman in the pub of life. The pretzels come along for a good time and add a fantastic texture while lending a subtle element of flavour. 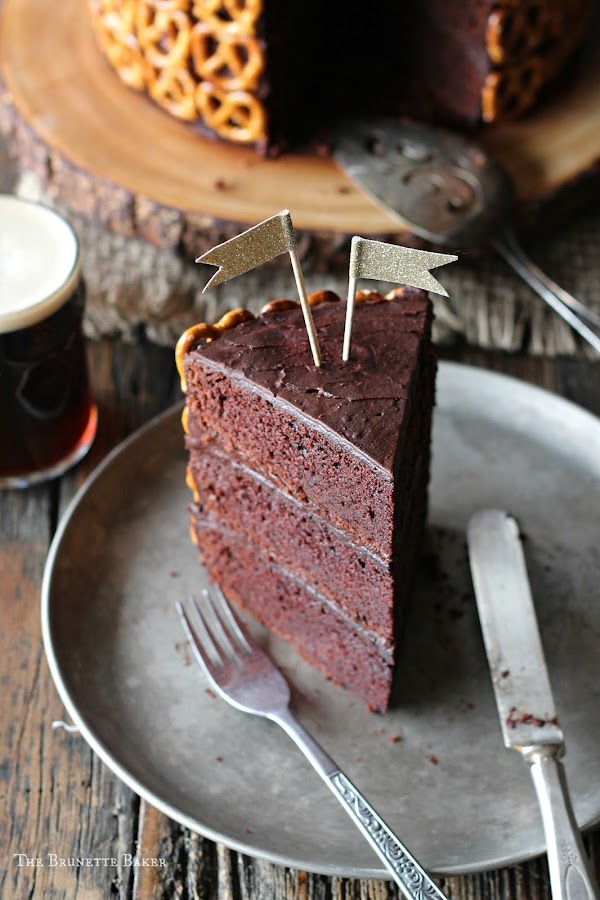 In this particular recipe, I did make a couple of small changes. The first time I made this cake (my test run), I used Guinness as called for in the recipe and it was amazing. The second time around, I successfully switched out the Guinness for a locally brewed Vanilla Porter after Robyn suggested it. It was equally delicious, but perhaps a bit more pronounced in flavour.

I also modified the recipe to create three full layers rather than slicing two layers in half to essentially create four layers as the book suggests. I am truly awful at slicing cakes in half, partly because I'm so impatient and it requires a steady hand. My method was necessary for my OCD. I tried, friends. I honestly tried. However, I may have been too adventurous in my modifications because the cake and the slices were mile high. Fabulous, but big. Definitely not for the faint of heart or those weirdos folks not into sweets or desserts.

To frost this gorgeous chocolate mammoth, I followed Rosie's Guinness Buttercream recipe, but omitted the Guinness from the recipe as I felt there was enough of a beer flavour from the cake. I really wanted the chocolate buttercream to shine through and give a good balance between the two.

Finally, I embellished the outside of the cake using whole mini pretzels, rather than crushed up as Rosie uses. I saw this method done on the cover of Joy The Baker's Homemade Decadence cookbook and simply loved the look.

Overall, this cake was a big hit with family, friends and neighbours. 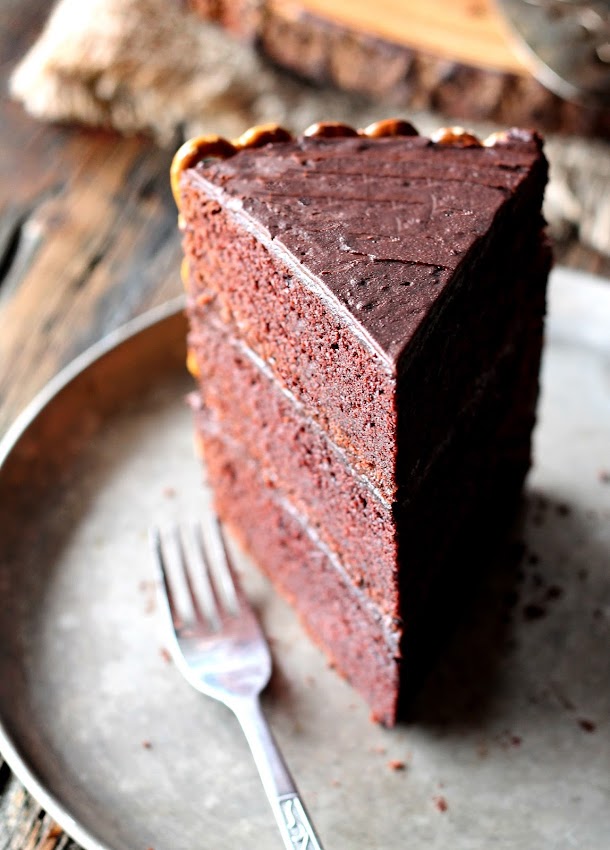 The actual cookbook itself is stunning. Butter Celebrates! breaks down special occasions into different chapters from Valentine's Day featuring Chocolate Whoopie Hearts with Raspberry Fluff to Hanukkah and her take on the Sufganioyt (Jelly Doughnuts). She even has a chapter dedicated for the loveable pup with recipes like Peanut Butter Dog Bones. Best of all, her radiant personality shines through page after page. I had the utmost pleasure of meeting Rosie several times and she's such a delightful person. If you know her, consider yourself so lucky to be in her presence. 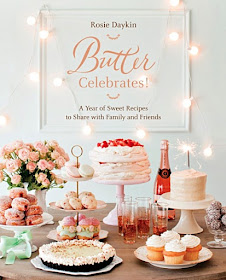 This is a bakebook that deserves to be part of your cookbook arsenal right next to her original, Butter.

Please don't take my word for it alone. I implore you to check out my fellow bloggers as they share their experiences with Butter Celebrates!

Jacquee of I Sugar Coat It made Eggnog-less Bars
Meg of Sweet Twist of Blogging made Lemony Lemon Loaf
Heather of The Tasty Gardener made a Cookie Feast: Cinnamon Hearts, Empire, Coconut Nest, and Lemon Drop Cookies
Robyn of What's Cooking on Planet Byn made Orange Gingerbread Cake
Gwen of Devour and Conquer made Christmas Panettone
Mardi of Eat. Live. Travel. Write. made Champagne Cupcakes
Jan of Family Bites made Animal Cookies
Kelly of KellyNeil.ca made Peppermint Nanaimo Bars
Christina of Strawberries for Supper made Cupcakes with the Mostess
Libby of LibbyRoach.ca made Gingerbread Guys

We are giving one lucky reader the chance to win a personally signed Butter Celebrates! Cookbook by Author Rosie Daykin along with a box of delicious goodies from her bakery, Butter Baked Goods in Vancouver, BC.

To enter, follow the Rafflecopter prompt below (see all rules and regulations below) and let me know what your FAVOURITE Holiday Dessert is in the blog comments below.

This giveaway is open to all legal residents of Canada who have reached the age of majority at the time of the contest in the province or territory in which they reside. Void in Quebec.

Winner must answer a mathematical skill-testing question. No purchase necessary to enter.

Giveaway will run from Wednesday, November 25, 2015 at 12:01am to Wednesday, December 2, 2015 at 11:59pm. Winner will be contacted via email and name will be displayed on Rafflecopter widget. Email address will never be given out to any third party or anyone for that matter.

Oodles of thanks and love to the kind folks of Appetite of Random House for the complimentary copy of Butter Celebrates!
Share