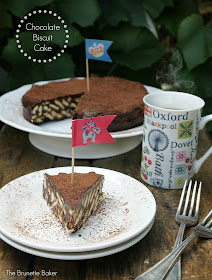 As the 'Great Kate Wait' carries on in Britain, the whole world is watching, holding its breath in anticipation of the birth of the Royal baby.

And naturally, I'm one of them.

Now I'm not British, but I married one, so that's close enough. Actually, that first statement is a lie if you look deep into my heritage. Apparently, I come from a line of nobility, but thisclose to royalty, which shouldn't be a surprise since I like to think I'm Queen most days.

The lineage on my mother's side has been traced back to 1066, originating in Wales, although my family history didn't get interesting until about the late 1400s, early 1500s. My 14th Great-Grandmother married an Earl - not a guy named Earl, but an actual Earl, as in member of nobility. I believe her father was a Baron, so for argument sake, let's just say she was SUPER noble. In fact, I wouldn't be too far off the mark to say that BOTH her and her husband were pretty high up in rank; the Posh and Becks of their time. My 15th Great-Grandfather was apparently beheaded by Henry the VIII (I am I am) along with my 16th Great-Grandmother at a later date, for committing treason, but it was later determined that the only reason they were executed was their claim to the throne. WHAT?

Yes. You read right. CLAIM. TO. THE. THRONE. This only means one thing my friends.

I could be dripping or at least frosted in diamonds and rubies as we speak if not for some jealous spats back in the days of yore.

To show I'm not bitter about the whole situation and in honour of the impending birth, I made a cake.

This is the same cake (with my own twist of course) that was served to Prince William at his birthday parties when he was a lad and also served as his Groom's Cake when he married Kate.

It's simple. It's no bake. It's delicious.

Almost as delicious as the 40-carat diamond tiara that should be on my head.

For the ganache frosting:

Lightly grease a small (6 or 7-inch) cake ring or springform pan with butter or a non-stick spray that has a flour base in it. Cut a piece of parchment paper to match that of the bottom.

Break the biscuits into bite-size pieces; set aside. 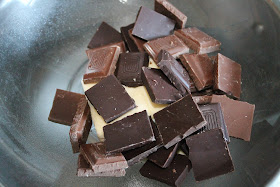 Fold in broken biscuits, raisins, and hazelnuts until they are all completely coated. 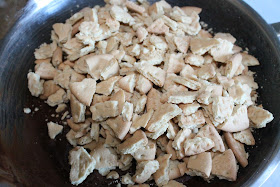 Spoon mixture into the prepared pan and refrigerate for at least 2-3 hours. 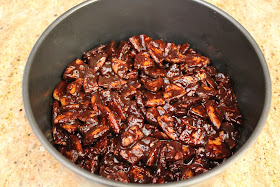 Remove the cake from the refrigerator and let it stand for a couple minutes. Run a butter knife around the perimeter of cake and flip over onto wire rack. Remove ring and parchment paper. 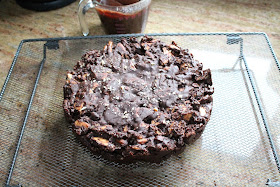 Place butter and heavy cream in a saucepan and bring to a bubbling simmer. Pour over chocolate and stir until smooth and creamy. Allow to cool for about 10 minutes.
Using an offset spatula, apply ganache frosting to top and sides of cake. Allow the frosting to set at room temperature. 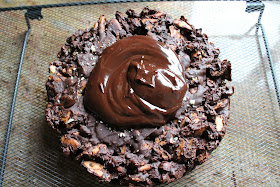 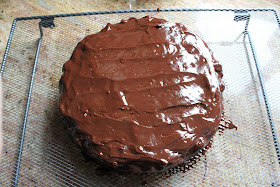 Carefully run a knife around the bottom of the cake where it may have stuck to the cooling rack and transfer the cake to a serving dish.
Share