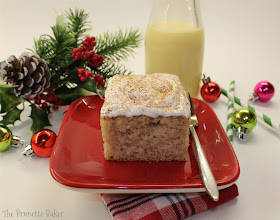 I think my neighbors are in the middle of a Christmas decoration turf war.

We moved onto my street about 5 years ago, just after the new year. Pretty sidewalks dressed in holiday style was still very much in effect. However, there's a house across the street from us that is just spectacular every year and takes that meaning to a whole other level.

This house dons 10,000 soft white lights that are perfectly strung onto the eavestroughs over the entire house, the bushes and mulberry tree in the middle of their perfect yard are also immaculately wrapped with lights; large, tasteful wreaths and lush garland are hung on the front door and lamppost, and their perfect 118 foot glowing tree is displayed in their perfect front window. Seriously, it's a page right out of a magazine. It's almost hilarious. Don't get me wrong - the house is gorgeous...stunning, it really is, but it's a bit over the top. I certainly don't envy the put up and take down process - or their electric bill.

Then there's us. The house that would have no problem putting up lights that write out the word, 'Ditto', with an arrow pointing to the overly jazzed up house. Oh, we deck the halls inside the house, but outside, we're pretty simple. A strand or two of lights on the lilac bush, a wreath. Simple. It's bloody cold in January. I'm not about to stand out there as the arctic chill rips through my veins, taking down lights and displays. And there is no way in Hades I'm leaving them up until Spring either.

The family that lives in the house next to the magazine house moved onto the street this year. They have small children and Dad's like a big kid, so it's been oodles of fun to watch the house transform each holiday or special occasion into a play land. Their decorations are amazing, but Christmas has been especially thrilling. Multicolored lights loosely, but plentifully, trim the house, a red and green light bulb shines on either side of the garage, and 4 massive inflatables; Hello Kitty, a snowman, a present, and Snoopy, take up most of the yard. It's awesome.

I don't exactly think the magazine house next door shares my enthusiasm. In fact, I wouldn't be surprised to hear he's seething. I'm also pretty sure they've secretly upped the ante because their lights have been going on at 4pm and two LED Christmas reindeer suddenly appeared in their yard.

Two nights ago, the fun house added light up candy canes that line their driveway.

It's been so much fun to watch. I'm looking forward to see which one can out Griswold the other.

In the meantime, enjoy some cake. I'll keep you posted on who is the first to put Santa and 9 reindeer up on the roof.

Or the first to incorporate Easter or Valentine's Day into their display.

In a large mixing bowl, place all cake ingredients listed above (and by 'place', I mean, just dump it all in. It's Christmas. We're pressed for time here). Beat until incorporated. 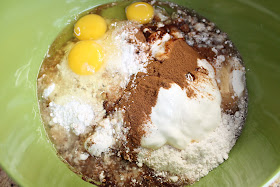 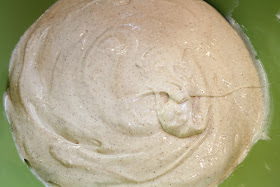 Pour cake batter into prepared baking dish and smooth over with an offset spatula. Bake for designated time on the back of cake mix box. 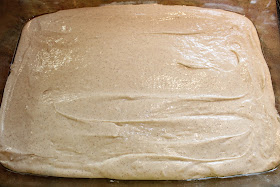 In a small bowl or measuring cup, combine sweetened condensed milk, eggnog, nutmeg, and rum, if using, together; set aside. 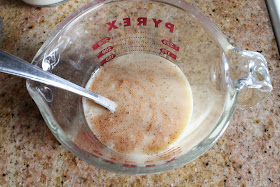 Remove cake from oven and allow to cool for about 10 minutes. While cake is still warm, poke holes over entire surface using a skewer. Be generous with the poking. 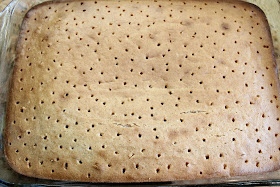 Using a pastry brush, apply eggnog mixture over entire surface using gentle strokes. Don't worry if the skin of the cake lifts a bit. Any imperfection will be covered with whipped topping. You may have some eggnog mixture left over. This can be used as an extra garnish when serving. Refrigerate for about an hour to allow eggnog mixture to completely absorb into the cake. 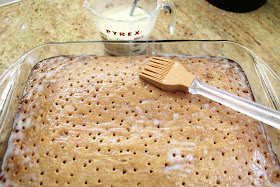 Apply a generous layer of Cool Whip over the surface and sprinkle with sugar and spice mixture. 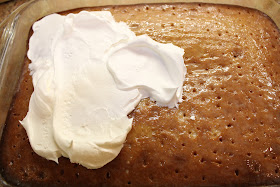 Chill cake for an hour or so before serving.
Share