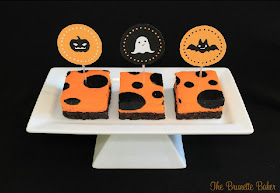 I know it's only the first week of October and I'm already all up in your grill with Halloween treats, but I figure it will be here before you know it, so you'll be thanking me soon enough. Or not. Whatever.


In saying that, I still can't bring myself to crack out the pumpkin goodness. Even with the fact that Canadian Thanksgiving is next week, I should be pumpkin happy - I'm slowly getting used to the fact that Thanksgiving falls before Halloween here in the True North, but the issue is that once I submit to pumpkin recipes, it's like I'm officially saying goodbye to summer - that also means saying goodbye to my beloved flip-flops. For months.

And I'm not quite there yet.

Yes, it's been getting cooler. Yes, the leaves are changing. Yes, that ONE annoying squirrel keeps stealing all the bird seed from my feeders, but a warm snap may come back and taunt me, calling me a fool. It's one thing to let Sidney the Squirrel destroy my bird oasis (yes, I give names to wildlife), it's another to allow the cooler air to take away my right to show off my hot pink polished toes for just a while longer. I won't go down without a fight.

Do you want to know the most ironic and ridiculous thing of all? Fall is my favorite season. I know, it makes absolutely NO sense whatsoever, but I guess if I had to explain my logic, it's that summers are just not long enough. It's either way too hot to enjoy or it gets cold too quickly. I miss those quintessential summer days.

So I'm subjecting you to cheesecake bars until I surrender. I'm sure that's such an imposition and you're crippling in agony over my choice.

But after a bite of these super cute and super tasty treats, you be goblin them down one by one. Get it? Goblin? Gobbling? Ha.

Yeah, I am clearly not known for my jokes. I'll just stick to what I know.

Prepare brownies according to box. Spread brownie mix into baking dish in an even layer. Bake for approximately 20 minutes. Remove from oven and allow to cool for 15 minutes. 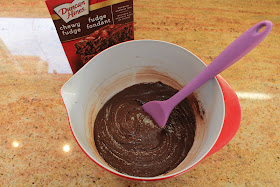 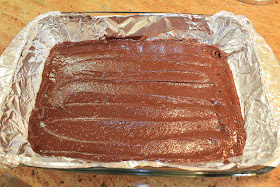 Beat cream cheese in a large mixing bowl. Add vanilla and sugar. Add eggs, one at a time, beating well after each addition. Add flour and mix. 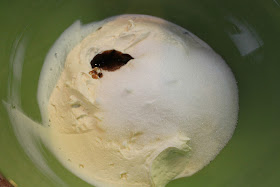 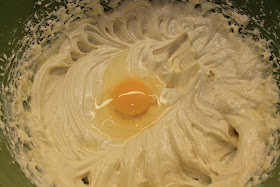 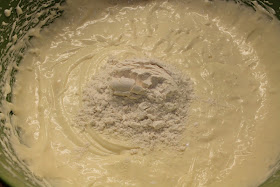 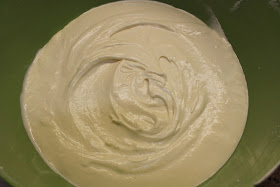 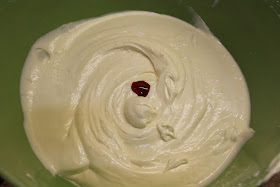 Pour orange tinted batter into baking dish, over the brownies, smoothing out into an even layer. 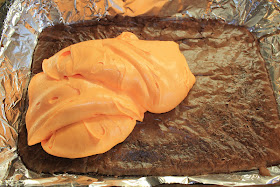 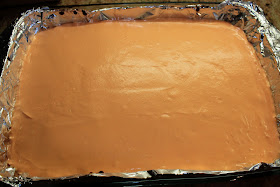 Pour black food coloring into a Ziploc or piping bag and snip off the end. Pipe out different sizes of polka dots into the orange batter. There is no rhyme or reason to this method, just pipe as you see fit. 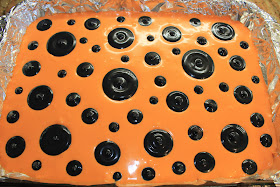 Once complete, give the dish a good shake and tap on the counter to release any air bubbles that may have formed.

Place a large dish of hot water, or a bain marie, underneath the cheesecake bars. This will help prevent the top from cracking while baking.

Bake for 30-35 minutes. Remove from oven and allow to cool. Place bars in the refrigerator and allow to chill for a few hours before cutting. 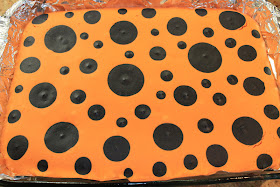