I am a SERIOUS Olympic junkie, especially Summer. I could sit and watch for hours if it was acceptable to do so - and if my children were old enough to at least make themselves, and me, a sandwich. And a cup of tea.

It's even more exciting, because this year, it's in London. I'm missing the UK more than one could imagine, so during some events, like bicycling, where they ride through the streets and small villages that attach to London, it is that much harder to watch. My heart pines for it.

I am a nervous wreck when I watch any of the events. It's nail biting excitement for 3 weeks. To make matters worse, I'm an emotional eater. I always have been. When I'm tired, I eat. When I'm bored, I eat, but when nervous situations warrant it, like sports, dramatic movies, or the Real Housewives series, forget it. I'm like Henry the VIII at his last meal. Mind you, the RH's is popcorn mandatory, so it doesn't really count. And it certainly doesn't make me nervous. If anything, it's cat-fight deliciousness.

Speaking of popcorn, since the Olympics started, I have been stuffing my gob by the fistfuls, screaming at the TV like a banshee for the athletes to move their tails, getting all sorts of red in the face, while kernels fly through the air. My house looks like the aftermath of the Super Bowl party pretty much every night. However, I tow the line at the double can hat with built-in straw. That's just loutish.

Can I just say that if I was ever in the Olympics and won a medal, especially a gold, I would be an absolute mess on the podium. My composure would fly out the window and I would be sobbing like a toddler that just lost their balloon. Unless they add a cupcake eating contest, I won't be competing in one in my lifetime, so we won't need to see the blubbering fool I would turn into.

Of course, popcorn decorating the air isn't in proper British form. One should stop and enjoy a proper cup of tea with a delicious British confection.

Bakewell tarts are fabulous on their own, but brilliant with a cuppa. However, I tow the line with the pinky extended in the air.

Unless you attach a foam finger onto it.

That's about as proper as I get.

For the crust:
Please see my Grandma's Rhubarb Tarts for instructions:

Preheat oven to 350ºF. Coat a 12-cup muffin tin with flour. Roll out and cut dough into 24 disks, a size slightly larger than the muffin cup. Form to shape the cup and set aside. 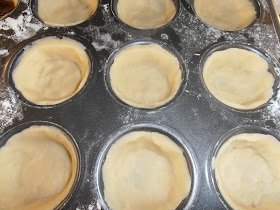 In a large bowl, beat butter and sugar until creamy. Add eggs, one at a time, until fully incorporated. Blend in almond extract, ground almonds, flour, baking soda, and salt.

Spoon about a tablespoon of jam into the bottom of cup. 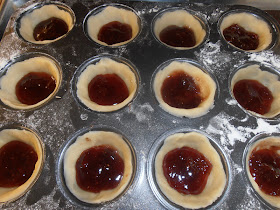 Spoon about a tablespoon of almond mixture on top. For some reason, these look really full, but they weren't. 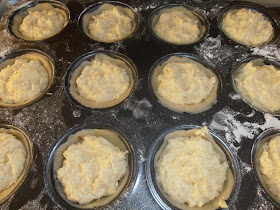 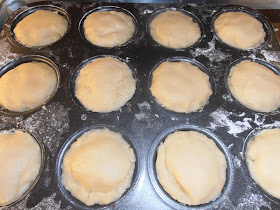 Bake for approximately 20 minutes. Allow to cool for a few minutes and transfer to a rack.

To make the icing:

In a small bowl, combine sugar and milk until well blended.  Drizzle over top of tarts and immediately place a cherry on top.