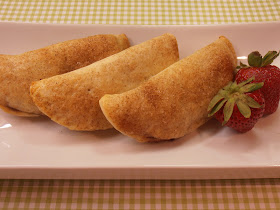 I was recently out for dinner with some lovely friends of mine. Whenever we get together, food is always the main topic of our conversations. If it doesn't start out with it, it will certainly end with it.

This particular conversation, however, the girls were going on and on and on and ON about Nutella being the best combination since peanut butter and chocolate collided.

Um, you're kidding, right? No, seriously, you are kidding? You dare to compare peanut butter and chocolate to hazelnuts and chocolate? You kiss your mother with that mouth?

Then I chimed in with, "Oh for heaven's sake, what is all the fuss about Nutella?"

Well, you would have thought I just shot Brad Pitt. It was like deer in headlight glares. Needles zipping off records. Forks being dropped onto plates. Cries from two tables over. Servers passing out. Then...silence.

As the ambianic music turned back on and everything returned to as it was before, I was like, "Calm down. Seriously though, what is the deal?"

Five women immediately began rambling at once, as if trying to explain to their husbands why there was a hefty $575 charge from Macy's on the credit card bill, singing the praises of this chocolate hazelnut spread.

Because I am who I am, I like to give everything the benefit of the doubt. I gave Nutella another try, but this time, in dessert empanadas. I went with strawberries in this as well, but chose them over bananas due to my strong aversion of the banana and chocolate combination. Gag. I know, and I call myself a foodie.

Suddenly I understood the craze. The mister and I couldn't stop eating them. There was a nibble taken out of one every time we passed the plate.

I admit defeat and stand corrected. However, chocolate and peanut butter will forever remain the original and favored classic - and like I've said before, some classics should never be messed with or one upped.

In a small bowl, mix the cinnamon and sugar together; set aside.

In a large bowl, combine cream cheese and butter until well blended, scraping down sides of bowl. Add flour and salt to butter mixture and mix well until dough forms a ball. 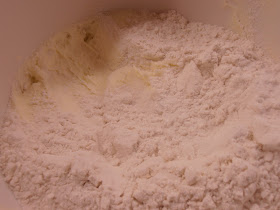 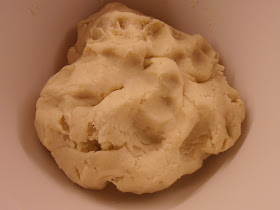 Turn the dough out onto a lightly floured surface and gently knead for about 1 minute. Wrap in plastic wrap and refrigerate for at least 20-30 minutes.

Divide dough into quarters. Roll out each section to ¼ inch thick. 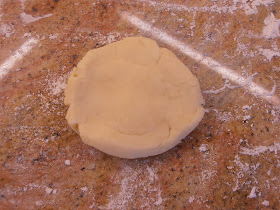 Using a glass or circular cookie cutter, cut desired rounds. I used a martini glass as I wanted larger empanadas.

Place a tablespoon of Nutella and about a teaspoon strawberries on one side of dough. Be sure the strawberries have as much of the juice taken out of them as possible. Fold dough over and seal or crimp tightly with fingers or fork. 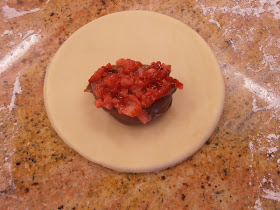 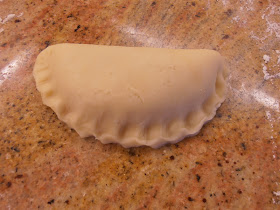 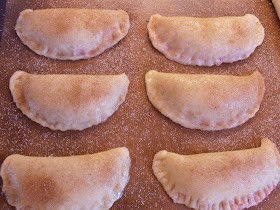 Bake for 14-16 minutes or until tops are a golden brown.

Remove from oven and allow to rest on tray for several minutes. Transfer to a wire rack and allow to cool completely.